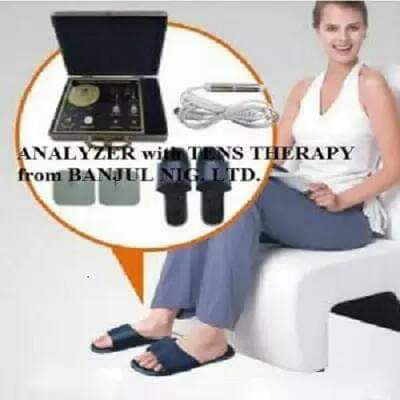 
This work is discussed under two parts:

I. Does Full Body Scan, aka Quantum Magnetic Resonance Analyser(QMRA) work(does it do what the makers tell us it can do?)

ii. If it works, does that " work" serve any useful medical/ health purpose?

As we will see, there could be a whole world of difference between something 'working" ,and that "work" serving a useful purpose.

Part I.. Does QMRA work?

a.. What is Quantum Resonance Magnetic Analyser(QMRA)?

.. has the advantages of completeness, non-invasiveness, practicality, simplicity, fastness, economy,...etc. ..."

b. QUANTUM MEDICINE -- The "Science" behind QMRA.

"...The human body is the aggregate of a large number of cells which are in continuous growth, development, differentiation, regeneration and apoptosis, and the cells constantly self-renew through its own division. 25 million cells are divided at one second in an adult’s body, and the body’s blood cells constantly renew at the rate of about 100 million per minute. In the process of cell division and growth, those charged bodies of atomic nucleuses constituting atoms as the basic unit of cell and the electrons outside the nucleus are in constant high-speed movement and changing, thereby constantly emitting electromagnetic waves.

of the electromagnetic wave changes caused by the changes of the human body’s diseases and physical changes in the nutritional status is extremely weak and usually is only nano gauss to microgauss. The frequency and energy of the weak magnetic field of HAIR, determined directly or by HOLDING THE SENSOR BY HAND compare with the resonance spectra of standard quantum of diseases and nutrition indicators set in the instrument ....

It’s similar to the principle of listening to broadcasting from the radio. There are many radio waves in the air. If you want to listen to some designated broadcasting, you can transfer the radio to the corresponding frequency, ... at this moment, resonance occurs, so that you can listen to this broadcasting. Quantum resonance uses this principle ..."

c. How the QMRA test is done?

This is the real practical aspects of QMRA.

"...The person just has to hold the sensor with a straight arm and then in under two minutes the machine will collect the magnetic field and thus transferring it to a program which is compatible with Windows and then generating a 41 test report.

An example of QMRA Test Result. The Liver Function "department" of the 41 Results.(Yes all the 41 results come out in one single sheet of paper?)

This comes under 4 Columns:

* Under " Normal range" are presumably the standard values for a perfectly healthy human specie, wherever he may be hiding!

* Under "Actual measurement Value" comes the patient's readings for that test.

* Finally, comes "The testing Result", which is QMRA's "Verdict" on the patient's health.

A thunderous NO!!! from many, many experts from around the globe. A few examples will do:

* From USA: "Quantum Resonance Magnetic Analyzer (QRMA) is a crap!!! DONT BUY IT!!..

... when ...wrapped a damp cloth around the sensor, it seemingly fooled the device into thinking that someone was holding the probe. The machine started happily generating a “health report”. According to the QRMA machine, the cloth had various minor ailments, including “moderately abnormal” cardiovascular health..". Prof. David Chalpin, Physician - Diagnostic Radiologist.

From Ghana: .."...This strange medical technology with a dubious history seems to be becoming increasingly popular in Ghana.

...When my colleague wrapped a damp cloth around the sensor, it seemingly fooled the device into thinking that someone was holding the probe. The machine started happily generating a “health report”. According to the QRMA machine, the cloth had various minor ailments, including “moderately abnormal” cardiovascular health, high liver fat, etc....

... In summary, it appears the “quantum resonance” medical devices on the market today, may not be providing any useful medical information.... we cannot trust any QRMA device with the job of assessing our health..."

Do I also agree that QMRA test is quackery?

A short story will do here: Forty years ago. -- in the year 1978 -- after the Jonestown Carnage in which more than a thousand American "Christians" were charmed to commit mass suicide under the compelling, magnetic(that word, again) influence of Rev.Jim Jones, there was a near-unanimus nationwide call for religious "cults," to be outlawed in the United States. And, remarkably, this was during the regime of President James Earl Carter(aka Jimmy Carter), who was an ordained Baptist priest. But as Americans waited for the crafting of that law, a simplle statement from their chief law officer -- the Attorney General, Griffin Bell - put a permanent end to those expectations,: Said he:,: “I don't know what a cult is. I am a member of the Baptist Church. I suppose I am in a cult.”

So, can one quack really "quack" another?

So, let's just go to the second leg of our discussion.

Part II.. Does QMRA really serve any medical/ health purpose even if it works.?

My take here is a capital NO!!!

This is now my main field, and, I have no apologies here! Why

As we saw in Part I. above,"The testing Result", which is QMRA's declarations on the patient's health status ,only comes with vague, amorphous -- even pedantic -- verdicts like Normal ; + Mildly Abnormal ;++ Moderately Abnormal ; +++ Severely Abnormal. This applies to virtually all QMRA's anatomical and physiological assessment of the human body.

Now, how do these values help? Pretty little!

Why? Because as Karl Make once said, in application to politics, “The philosophers have only interpreted the world in various ways; the point, however, is to change it.”

In the same vein, how do results (terms) like "moderately normal" liver, or heart, or fats, or even serotonin and dopamine in the brain, translate to any wonderful breakthrough in assessing anyone's health?

Who decided on the "normal" values, anyway?

In fact, we know that any attempt to create common normal values for all men is an anathema. Why?? Because all the organs of every system of the body are on a CONTINUAL, UNSTOPPABLE, decline, for every mortal - both in health and in disease!! Really? Sure!!

To prove this, let's consider a chapter from my book, titled: OLD AGE IS NOT A DISEASE".

Our chapter of interest is captioned, "THE BIOLOGY OF AGING: HOW WE AGE.

A few excerpts will do here:

b. MUSCLES AND FATS: Loss of mass and strength due mainly to sedentary lifestyle; actual loss of muscle cells and its replacement with fibrous tissues.

There is on average a 40 to 50% reduction in an individual's muscle mass between ages 30 and 70, with a simultaneous increase in body fat. This transition sets the groundwork for slower metabolism, reduced physical activities, and difficulty burning calories, thus leading to weight gain...”.

c. NERVOUS SYSTEM: Slowed reflexes, less efficient reaction to stimuli; impairment of recent memory; narrowness of interest; this may graduate to amnesia, even dementia. These go along with the PROGRESSIVE DECREASE in brain WEIGHT, which could reach a 50% reduction at age 75!

* GIT(Bowel): Reduced motility and in general peristalsis. This may provoke constipation, indigestion,etc.

* Kidneys: Reduced blood flow and GFR; may predispose to bladder infections in women and prostate enlargement in men.

The physician, Dr Tim LaHaye once said that, " when a man has reached the age of 40 his most important SEX organ should be his BRAIN!"

This should also apply to women, especially those inside the menopause perimeter; in fact, sexual performance of boh men and women are on continuous decline with the advance in their years..."..

Senescence is the NORMAL decrement in intellectual functioning with age.

This normally tallies with the PROGRESSIVE DECREASE in brain weight, which could reach a 50% reduction at age 75, EVEN IN HEALTHY INDIVIDUALS!

Senility is a serious pathological situation not necessarily occasioned by,nor progresses due to, aging; may manifest in SEVERE memory loss, EXTREME decline in intellectual functioning,etc.."

So, what is the big deal in "discovering" that the QMRA values obtained from, say, a 60 year old is "Moderately Abnormal" ;or even "Severely Abnormal" in the assessment of that individual's kidney, bladder, brain? No big deal at alI, from what we agreed above.

Now, my Judgement: The indices generated by TOTAL BODY CHECK or FULL BODY SCANS , aka Quantum Magnetic Resonance Analyser (QMRA) -- if it works at all! -- cannot serve any clear clinical purpose in making the human body healthier. I Rise!