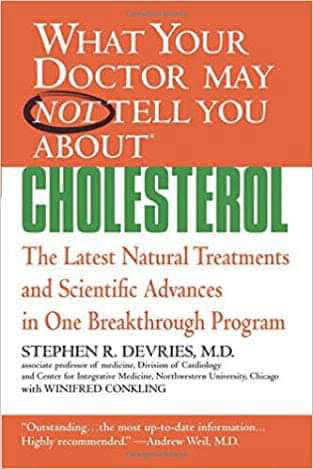 
Monday Morning on the Sikamoretree..

Title: No association between 'bad cholesterol' and elderly deaths.

Source:University of South Florida , Published in BMJ on June 27, 2016

* An international team of experts has found that older people with high levels of low-density lipoprotein (LDL-C) live as long, and often longer, than their peers with low levels of LDL-C. The findings, resulting from an analysis of past studies involving more than 68,000 participants over 60 years of age, call into question the 'cholesterol hypothesis' which suggests people with high cholesterol are at risk of dying and need statin drugs to lower their cholesterol.

*... this Systematic review of studies of over 68,000 elderly people also raises questions about the benefits of statin drug treatments

The findings, which came after analyzing past studies involving more than 68,000 participants over 60 years of age, call into question the "cholesterol hypothesis," which previously suggested people with high cholesterol are more at risk of dying and would need statin drugs to lower their cholesterol.

* Appearing online this month in the open access version of the British Medical Journal, the research team's analysis represents the first review of a large group of prior studies on this issue.

* "We have known for decades that high total cholesterol becomes a much weaker risk for cardiovascular disease with advancing age," said Diamond. "In this analysis, we focused on the so-called "bad cholesterol" which has been blamed for contributing to heart disease."

* According to the authors, either a lack of association or an inverse relationship between LDL-C and cardiovascular deaths was present in each of the studies they evaluated. Subsequently, the research team called for a reevaluation of the need for drugs, such as statins, which are aimed at reducing LDL-C as a step to prevent cardiovascular diseases.

* "We found that several studies reported not only a lack of association between low LDL-C, but most people in these studies exhibited an inverse relationship, which means that higher LDL-C among the elderly is often associated with longer life," said Diamond.

* Diamond also points out the research that suggests that high cholesterol may be protective against diseases which are common in the elderly.

* For example, high levels of cholesterol are associated with a lower rate of neurological disorders, such as Parkinson's disease and Alzheimer's disease.

* Other studies have suggested that high LDL-C may protect against some often fatal diseases, such as cancer and infectious diseases, and that having low LDL-C may increase one's susceptibility to these diseases.

* "Our results pose several relevant questions for future," said study leader and co-author health researcher Dr. Uffe Ravnskov. "For example, why is total cholesterol a factor for cardiovascular disease for young and middle-age people, but not for the elderly?

* Diamond and colleagues have published a number of studies relating to the use and possible misuse of statins for treating cholesterol. Those studies, including their recent paper published in the medical journal Expert Review of Clinical Pharmacology, which demonstrated that the benefits of taking statins have been exaggerated and are misleading.

"Our findings provide a contradiction to the cholesterol hypothesis," concluded Diamond. "That hypothesis predicts that cardiovascular disease starts in middle age as a result of high LDL-C cholesterol, worsens with aging, and eventually leads to death from cardiovascular disease. We did not find that trend. If LDL-C is accumulating in arteries over a lifetime to cause heart disease, then why is it that elderly people with the highest LDL-C live the longest? Since people over the age of 60 with high LDL-C live the longest, why should we lower it?"

Part Two. How Low Cholesterol Causes Stroke in all Women.

Study Summary: " A new study finds that women who have levels of LDL cholesterol 70 mg/dL or lower may be more than twice as likely to have a hemorrhagic stroke than women with LDL cholesterol levels from 100 to 130 mg/dL. The study is published in the April 10, 2019, online issue of Neurology®, the medical journal of the American Academy of Neurology...

# Hemorrhagic strokes, also known as bleeding strokes, are much less common than ischemic strokes, when blood flow is blocked to the brain. They are also more difficult to treat and therefore more likely to be deadly.

# "... our large study shows that in women, very low levels may also carry some risks. Women already have a higher risk of stroke than men, in part because they live longer, so clearly defining ways to reduce their risk is important."...writes study author Pamela Rist, ScD, of Brigham and Women's Hospital in Boston and a member of the American Academy of Neurology.

# The study involved 27,937 women age 45 and older enrolled in the Women's Health Study who had total cholesterol, LDL cholesterol, high density lipoprotein (HDL) cholesterol, which is known as good cholesterol, and triglycerides measured at the start of the study. Researchers then reviewed medical records to determine how many women had a bleeding stroke.

With an average of 19 years of follow-up, researchers identified 137 women who had a bleeding stroke.

No difference in risk was found for total cholesterol or HDL cholesterol.

# The study was supported by the National Institutes of Health & Materials provided by American Academy of Neurology.

As a parting shot, take these Stunning inputs from our Cholesterol Dossier:

No I. "The medical profession is obsessed with lowering your cholesterol because of misguided theories about cholesterol and heart disease. Why would we want to lower it when the research actually shows that THREE QUARTER'S OF PEOPLE having a first heart attack have NORMAL OR LOW CHOLESTEROL LEVELS...? . "-- Dr. Frank Lipman,MD, PhD.

No 2. "If low cholesterol levels prevent heart disease, then victims of heart attacks should have high cholesterol. This is not so. Over half of all heart attack victims have LOW CHOLESTEROL LEVELS!!l" -- Dr Paul Stitt.

No. 3: .".. over half of the patients who suffer a heart attack actually have normal cholesterol levels. In a review article that appeared in the January 14, 1999 issue of the New England Journal of Medicine the cause of hardening of the arteries is clearly attributed to inflammation of the arteries, and, not too much cholesterol"

-- Dr Ray Strand, MD , a Cardiologist, wrote the ground- breaking book, "WHAT YOUR DOCTOR DOESN'T KNOW ABOUT NUTRITIONAL MEDICINE MAY BE KILLING YOU".

Our Verdict: From the above few points, we can now unequivocally assert that every CHOLESTEROL -- LOWERING PRESCRIPTION is no better than a blazing LETTER BOMB, while EVERY DRUG contained therein is akin to a quiver - nosed ASSASIN'S BULLET.

I will like to be quoted - or contradicted - on this.